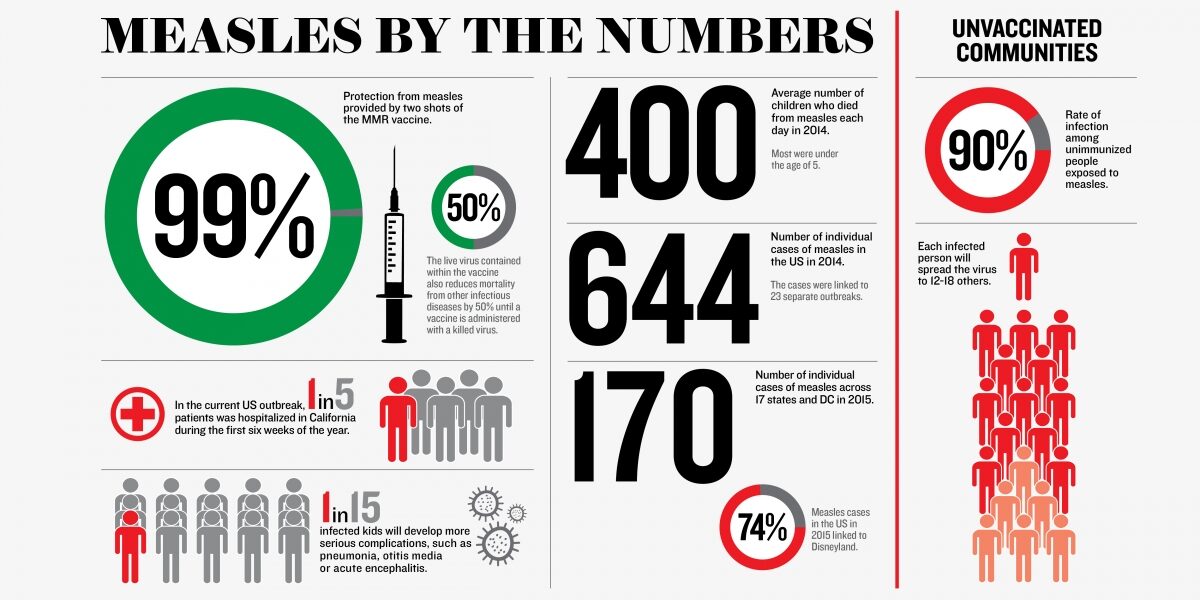 In 2000, when the scientific community declared measles had been eradicated in the United States, people were understandably overjoyed, especially people who had seen the devastating effects of the disease first-hand. For many, often children, measles had caused an unpleasant rash and a fever, sometimes developing into pneumonia. But for the most part, they recovered. For some, however, measles had infected the brain causing deafness, blindness, mental retardation, or even death—its effects were usually swift and irreversible. Parents watched as their children’s brains swelled and they began to convulse, drool, or lose their ability to interact with others. In the 1960s, when the measles vaccine was developed, the breakthrough was hailed as a miracle and people rushed to get vaccinated.

During the decades that followed, measles all but disappeared and in 2000, we thought we were done with it here in America. Unfortunately, we were not.

Measles is a highly contagious disease and to truly banish it, 95 percent of the population must be immunized. This provides what’s called “herd immunity,” protecting the most vulnerable in our communities who cannot be vaccinated such as babies younger than six months old, as well as those who receive the vaccine. As the details of the disease faded from memory and misinformation about the dangers of the vaccine spread, people stopped vaccinating their children. Which brings us to today, where measles outbreaks are currently happening in different parts of California.

In Mendocino County, we’re an independent bunch. We don’t like to be told what to do (by the government or anyone else) and we don’t always trust the scientific establishment. Some people hold religious or philosophical beliefs that discourage them from following the advice of doctors, and still others believe they are protecting their children from harm by avoiding vaccines. Clearly, when it comes to protecting children (and adults) against potentially life-threatening diseases, not everyone agrees on the best approach.

Here’s the thing: people who really want to know about whether vaccines are safe and effective have done study after study, and those studies continue to prove vaccines are both safe and effective. Scientists have disproved any link between vaccines and autism, even in populations where children have a genetic predisposition toward autism. Pediatricians and other doctors vaccinate their own children, and the dramatic decrease in the incidence of measles since the vaccine was developed certainly indicates it works. Maybe it’s time to revisit the belief that vaccines aren’t safe.

It can be hard to let go of something we believe, especially when we’ve held on to that belief for a long time. But for the health of your children and our whole community, please consider talking to someone who believes differently from you, who has the knowledge and/or experience to provide another point of view. Talk to a parent whose child has suffered from measles. Talk to a pediatrician who has tried to save the life of a child with measles.

When I spoke with pediatrician Dr. Chris Robshaw, he told me that if parents decide they’d like to bring in their unvaccinated child in to get vaccinated, the Pediatrics Office makes it really easy and convenient. They create a “catch-up schedule” tailored for each child. Once the doctor meets with the child once, future vaccination appointments can be made with nurses only, speeding the process along.

The MMR vaccine, which protects against measles, mumps, and rubella, is only one of many recommended vaccines. As a parent, you can choose to vaccinate your child against all the most dangerous diseases, or simply against some. At Mendocino Coast Clinics, we’re here to work with you as you care for your family.